Or - forward new posts to your email via

What do the following feature and documentary films have in common: Patch Adams? Bowling for Columbine? Wit? 42? They have all been used in the classroom to capture critical concepts and to support key learning outcomes. Unfortunately, using film can also consume classroom time – time needed to cover other essential ideas. Reynolds library seeks to solve that problem by licensing SWANK Digital Campus films.

1. Allows the faculty member to select from over twenty thousand feature films, and to…

2. Simply link to that film through one’s Blackboard shell.

So instead of watching the film in class, students can watch the film asynchronously and conveniently: in the Starbucks at 9 at night. More productively, classroom time can be used for discussion in order affirm those essential learning outcomes.

Here’s how to request a SWANK feature film:

1. Start by browsing our Video Library page to determine the various ways to show either streaming or DVD video in your classroom. 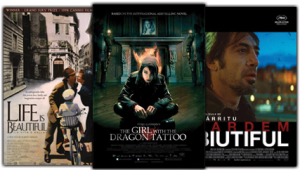 2. If you think that SWANK is a good pedagogical solution, search SWANK catalog. If the film comes up in the catalog, it’s available to be licensed.

3. Then just fill out this Reynolds form requesting the film that you would like to show through Blackboard. (You should get an email confirmation from a Reynolds’ librarian within two business days.)

4. It takes up to two weeks, for SWANK to generate a film portal for your requested film, so plan early. After approximately two weeks, you’ll receive a website address/url from a Reynolds’ librarian. Simply post that web address to your students in your Blackboard shell.

Here are some final important aspects regarding SWANK Digital Campus:

2. Currently, Reynolds Libraries will be licensing films one semester at a time; that means after the semester ends, access to the film ends. If you would like the library to license the film for a longer period of time, please indicate that need in the DVD or Streaming Media Request Form.

3. Although SWANK Digital Campus provides access to over 20 thousand films, Reynolds libraries only license the films that faculty plan to use with their students.

So, if you use a feature film in the classroom, consider “flipping” the scenario by using SWANK Digital Campus. Take the film outside of the classroom, in order to invite more learning (and time) in!